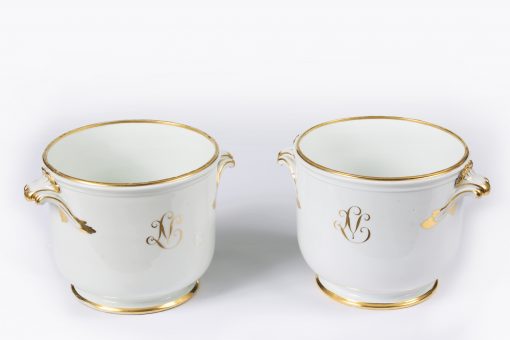 Jardinieres, ornamental holders in which exotic potted plants were displayed were introduced during the Regency era.
The custom of keeping plants in the house or in conservatories took hold in the 18th century, encouraged by the great variety of new species that were being brought back by explorers and plant hunters from a over the world, particularly from Asia and the Far East.  Many of them could not survive outdoors in the cold British or Irish climates and were grown only as conservatory plants.

Contemporary taste decreed that plants grown indoors had to be housed in attractive containers to harmonize with the rest of the room.  These were known as jardinieres, from the French word for garden.  Strictly speaking, jardinieres should have a drainage hole so plants can be potted directly into them.  An indoor plant-holder with no drainage hole is more correctly called by another French word, cache-pot (pot-hider), though the word jardiniere is loosely used today for both types.

To enquiry about "10384 – Early 19th Century Pair of Paris Porcelain Jardiniere or Cahé Pot", please complete the below form.