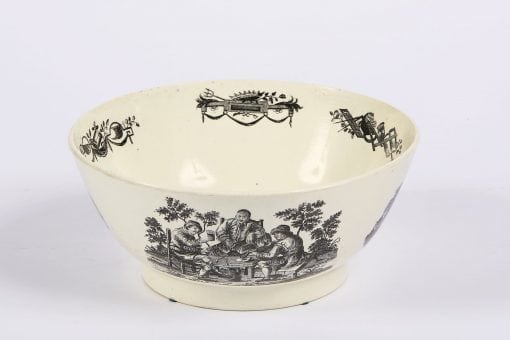 Toasting originated with the English custom of flavouring wine with a piece of browned and spiced toast. In 1709 Sir Richard Steels wrote of a lady whose name was supposed to flavour a wine like spiced toast. Thus evolved the notion that the individual or institution honoured with a toast would add flavour to the wine.

The bowl was made for mixing hot punch, for which creamware, being hygenic and heat-resistant, was very suitable. Punch was first made in Western Europe during the 17th century, and it became the favourite drink for parties and assemblies in the following one. Its name, deriving from the Persian or Hindu word for ‘five’, refers to its five ingredients: spirits (originally Arrack from Goa or Batavia), sugar, lemon or lime, nutmeg and other spices, and water. New recipes including sweet Malaga wine, rum and brandy were introduced in the 18th century, when variants, such as those combining gin or brandy with hot water and sugar, were also drunk.

To enquiry about "8962 – 18th Century Wedgewood Creamware Bowl", please complete the below form.