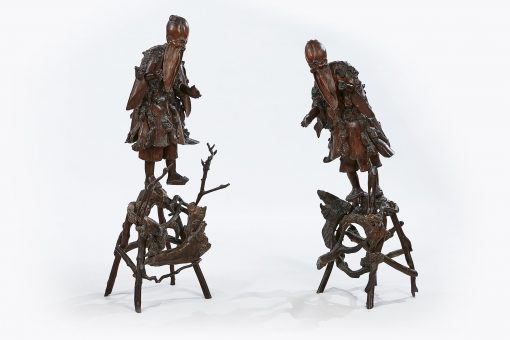 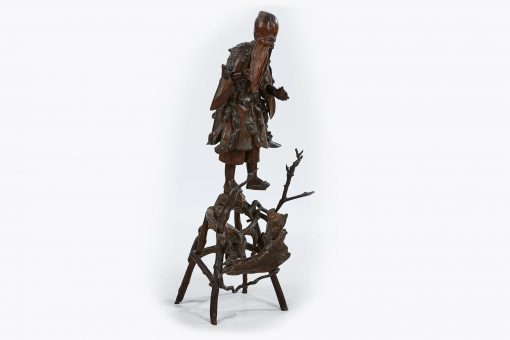 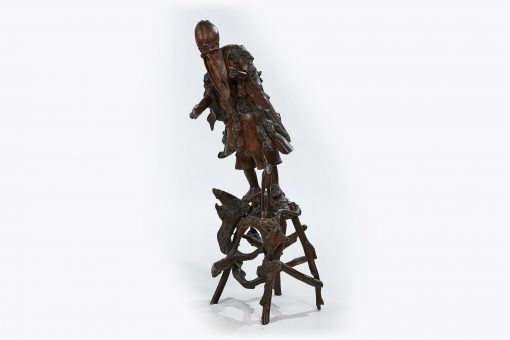 19th Century pair of Chinese root carvings of the Deity Shou Lao.  Root carving is an ancient Chinese art form, these carvings represent Shou Lao, a Chinese God who in Chinese tradition forms a trinity of Deities with Fu Shen and Lou.  Together they represent happiness, prosperity and longevity, in particular they are associated with Feng Shui and Daoism.

Shau Lao is a sage, a significant figure in Chinese culture, he is often represented holding a stick with a bald forehead and holding a peach.  Here he is perched on a rock, both the rock and the peach are also auspicious symbols of Longevity.  An important characteristic of traditional Chinese aesthetic is its symbolism or to speak through objects using the language of metaphors, references and puns, it is a special recognition system.

In 18th Century China during the Qing Dynasty, all aspects of culture flourished, the country was prosperous, it was a time of great peace.  In juxtaposition the 19th Century bore witness to much unrest.  War, overpopulation, diminished political control coupled with a series of natural and man-made disasters threw the Chinese population into chaos.  The Deity Shou Lao, God of Longevity achieved compelling importance during this unsettled period of history.   The Chinese people believed the possession of symbolic objects such as carvings and porcelain would realise their aspirations, in this unstable period of history they longed for greater duration of individual life.

To enquiry about "10082 – 19th Century Pair of Chinese Root Carvings of the Deity Shou Lao", please complete the below form.