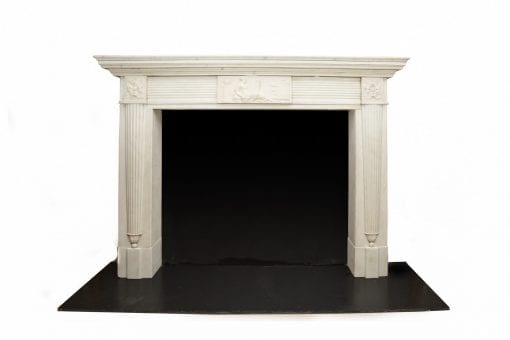 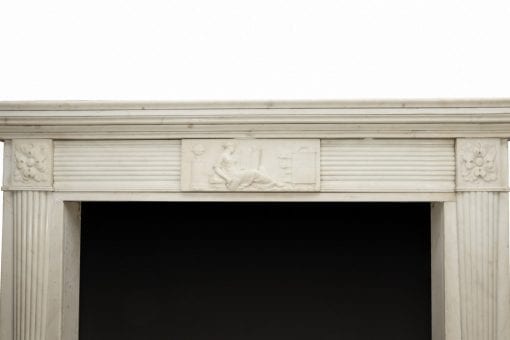 A fine early 19th Century Regency Neoclassical fire surround of white statuary marble. The central tablet sculpted with a reclining muse, probably Erato, reading a book. She is flanked by a celestial globe, a lyre with a scroll of music, and a laden bookcase, gathering inspiration for her Lyric and Love poetry. The ends of the frieze with floral decorated end blocks upheld by tapering reeded quiver shaped torches.

Provenance: 11 Hertford Street, London. This house was part of the development of the south side of the street by Henry Holland senior and his son Henry Holland between 1770 and 1771. (Henry Holland jnr. resided at no. 17.) The present chimney-piece was in the Drawing Room on the first floor of no. 11. It remained there until the late 1950s, and in the possession of the same family up to now.

The jambs on the present chimney-piece, reminiscent of Roman fasces, are similar to those on a chimney-piece designed by Holland for the Yellow Drawing Room at Althorp, Northamptonshire, also tapering pilasters on a leaf clasp and ball. They also relate to the supports on a drawing for a side table dated 1790, by Henry Holland for a library at Woburn Abbey. This design is included in a volume of 101 leaves containing details of interior decoration, chiefly chimney-pieces and mouldings.

Henry Holland (1745-1806), one of the foremost English architects of the 18th and early-19th Centuries, trained under Lancelot (‘Capability’) Brown, his future father-in-law, and began his practice by working with him on Claremont House for Robert Clive, 1st Baron Clive in 1771. From this same year he began the Hans Town development of about 90 acres of present day Knightsbridge and Chelsea, on what was then open field and marsh land, including Hans Place, Hans Street and Hans Crescent, Cadogan Place, Sloane Street and Sloane Square. In 1776 he designed Brooks’s Club in St. James’s Street. Amongst his country house commissions were the remodelling of Althorp, Northamptonshire (1787-89), Woburn Abbey, Bedfordshire (1787-1802) and Broadlands, Hampshire (1788-92). He is probably best known for his commissions for the Prince of Wales, the extraordinary Royal Pavilion at Brighton (1786-87), and his re-modelling of Carlton House (1783-c.1795), regrettably demolished in 1827, and for his later work at Southill Park, Bedfordshire (1796-1802) for Samuel Whitbread. The furniture he designed at Southill alongside his architectural fittings, including chimney-pieces, had a considerable influence on interior design. Other later work included Albany, Piccadilly (from 1802), the conversion of York House.