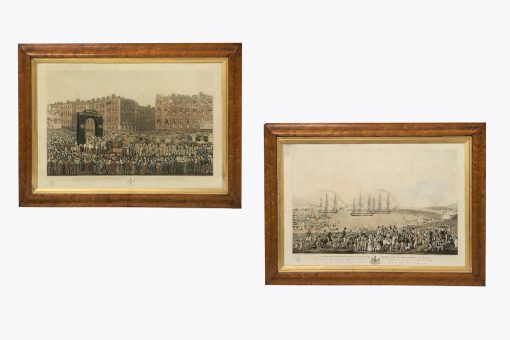 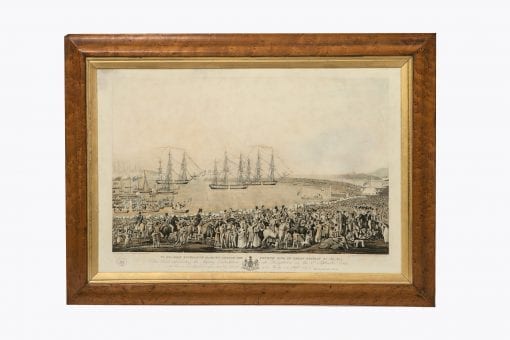 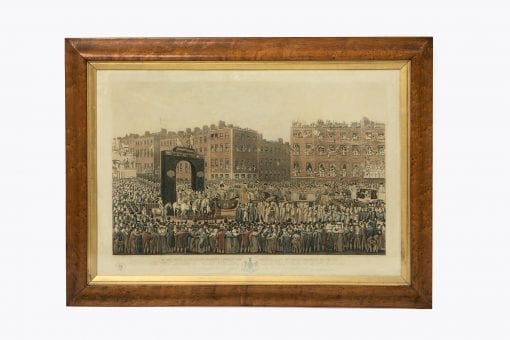 Early 19th Century pair of engravings, ‘George IV Visiting Dublin’, after Joseph Haverty RHA (1794 – 1864), ‘The Triumphant Entry of George IV into Dublin’, ‘His Majesty’s Arrival’, ‘His Majesty’s Embarkation’.  This pair of hand coloured engravings are by Robert Havell the Elder (1769-1832) and Robert Havell the Younger (1793-1878), the principal engravers of Audubon’s ‘Birds of America’, perhaps the most significant natural history publication of all time.

This pair of rare first state prints record the visit of George IV to Ireland in 1821 before the flags were re-engraved to fly at half mast for the death of Queen Caroline.  There is also a pair of these prints in the permanent collection of the National Gallery of Ireland.

The fine detail within the prints is exquisite, aquatint is an intaglio printmaking technique which is elegantly precise.  Beautifully composed, the first print depicts the King leading a procession of some two hundred carriages at the head of Sackville Street, near the Rotunda Hospital, amidst a spectacular flurry of flags and pageantry.

The 18 day visit by George IV began on August 12th 1820, the Kings 59th birthday, a mere three weeks after his coronation.  It first time a British monarch had visited the country without an accompanying army, The King’s visit was greeted with great rejoicing from the populace.  This detail image captures the immense excitement felt by the crowd.

Based on works by Joseph Haverty, a close friend of ‘The Liberator’, Daniel O’Connell, the paintings of the event drew inspiration from sketches made by John Lushington Reilly, whom Haverty has included in the embarkation scene. The figure of Reilly can be found in the central foreground sketching on horseback.

King George IV’s successful soujourn led to the comission of a new wrought iron bridge, the ‘Sean Heuston Bridge’ formerly ‘Kings Bridge’, crossing the Liffey at Heuston Station, designed by George Papworth, the iron castings for the bridge were produced at the nearby Royal Phoenix Iron Works.