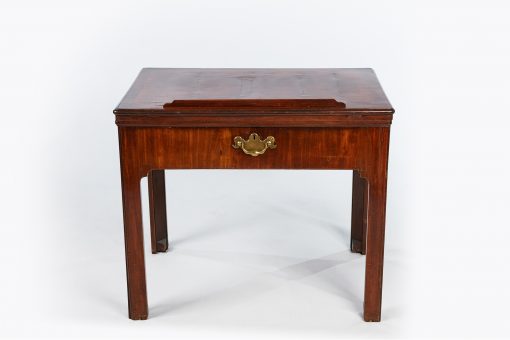 An exquisite and rare George II Mahogany Architect's Desk with ratchet top and extending drawer front.
This era defining piece of Georgian furniture gained popularity in the early eighteenth century owing to the explosion of interest in classical architecture. The Palladian revival popularised by Colen Campbell with the release of his Vitruvius Britannicus between 1715 and 1725 was supported by rich and influential benefactors such as the Earl of Burlington whose interest stretched much further than the ability to commission property. Numerous landed gentry were only too eager to try their hand at architectural design and many country houses in the UK carry the influence of their original owners.
Architectural publications such as Batty Langley's “Treasury of Designs” served as the crossover from architecture to furniture design and writing tables with ratcheted tops appear in the first edition of Chippendale's Director in 1754. Ince & Mayhew's “Universal System of Household Furniture” provides similar designs which bear closer resemblance to this piece where they are considered as “writing and reading tables” reflecting the enormous enthusiasm for learning and knowledge during the years of the enlightenment. Their inclusion in both of these influential works is testament to their popularity and the growing interest in metamorphic furniture that peaked in popularity during the Regency period.
This solid mahogany example retains its original brasswork and working lock to the front of the drawer. The drawer itself contains a partitioned base with sliding leather ratcheted worktop and semi-circular pen tray that extends from the side of the drawer when open.
The top has a single ratchet to the base and bookrest mechanism that extends from the front by means of two slides to the underside and retains it catch mechanism for securing in the closed position. Two candle rests are contained within the base and extend to either side.
The table is of simple design presenting the iconic chamfered inside leg so prevalent during the early to mid-eighteenth century and has a small gothic influenced motifs where the legs meet the body.
No piece of furniture conveys the spirit of the eighteenth century as much as the architects table for its ingenuity, its practicality and its style. A rare piece seldom seen in today's market.  Circa 1740 - 1760.
Price On Request 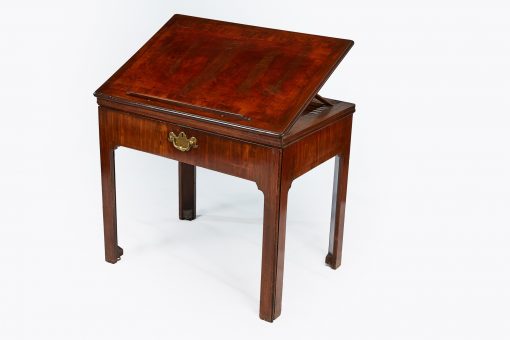 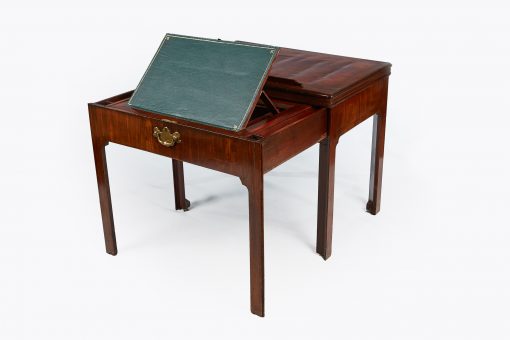 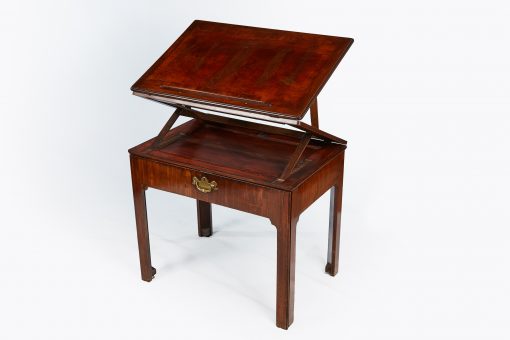